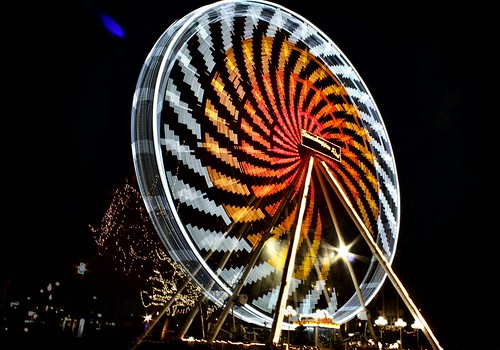 Let's have a look at a few definitions I found with a quick online search:
So are they all saying the same thing? Well, yes and no. To answer that we probably have to first ask two fundamental questions: Why do we want a 360 degree view? And then, What data are we actually storing in order to provide one?

So, why would someone want a 360 degree view?
One of the most common data - and thus fundraising - issues for a charity is that there are so many data silos in an organisation; i.e. multiple databases and spreadsheets. And therefore, we can't see every contact point (often called "touch points" if you're being data-cool) which a donor or supporter has had with us.

These are all good reasons for potentially wanting a 360 degree view.

So what about the data itself?
But even if we want a 360 view and we know why we want it, then what should that view show? Does it really have to show "everything" about a supporter? And even if it should do, can it?! Can we ever see/collect all contact points?

I guess, ideally, yes it should show everything - that is the only way to really see a "complete" picture of a supporter. But how do we really know we are collecting everything? Is everyone in the charity entering every interaction with every supporter? Unlikely. Or even if they are, then it could well be on a local version of Outlook, a spreadsheet somewhere, a third-party online database.

I should also clarify "everything". A 360 degree view does not necessarily mean creating one behemothic, single database which is your only database where you store all your data. Very often, a 360 degree view (almost by definition of "view") will just contain key data sourced from multiple databases within your organisation - just enough to ensure it can do... whatever it is you are trying to do with the 360 system.

So do you really want one?
Could be. Their potential benefits can be great. And don't let my last few paragraphs stop you from trying to create your 360 degree view if you do decide it is right for you! Even if we can't definitely say we are collecting everything, then that isn't a reason not to try to set-up a 360 degree view if you see the benefits of having one for your organisation and your needs. Just be aware it might not be everything. Start-off with what you know and build it up as you find more sources, more people who might use it and as you identify more benefits from doing so.

Finally, assuming you do have multiple systems at your organisation - highly likely no matter how centralised you try to make a centralised CRM/fundraising database - then there is always the technical challenge of actually achieving a 360 degree view. That is not always as easy as one might hope.
Posted by Ivan Wainewright at 8:00 am