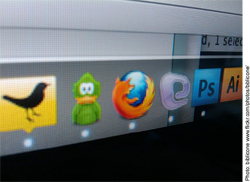 There are one or two vendors at the moment who are saying some amazing things about their “fundraising software” (and yes, I have deliberately put those words in quotes) so that if you believe their hype then you would think that you could implement their systems more cheaply, more quickly and oh so much better then any of those old-hat fundraising databases that have been around for years; and you’d be completely mad not to buy them now. Now! Apparently time is up for the old guard because they just can’t offer our WonderfulNewFunction (and we’re so much simpler to use) or they don’t run on TheNextBigThing.com platform or they don’t integrate with FaceTwitFlashSpace – which everyone knows is where every nonprofit has to be these days because they are raising, um, some money on it…  And it’s starting to drive me up the wall a bit.
So, good charity folk, listen up. Do not buy a new database because a vendor tells you they are simpler/cheaper/easier. Do not buy a new database just because a vendor tells you that you must must must use the Cloud. And do not buy a new database simply because it has a link to 3 social networking tools.
Now, before my face turns red with anger and steam comes out of my ears, let me clarify one thing: I am a very much a fan of SAAS. I believe in Open Source. I really think the new, more ‘generic’ CRM systems will give the traditional fundraising package suppliers a run for their money. I do. But I am also very much a fan of fundraising packages. I believe that proprietary software can be good. And, guess what, I am fan of systems which do what nonprofits want them to do. I think that (most of) the guys that have been around for years and years and who are still providing fundraising software are here for a reason. They are not selling still simply because there are no other options. Some of the functionality you will find in the better, package solutions has had thousands and thousands of man hours of development over years of real time. A new kid on the block may be able to replicate some of that more quickly, which is great, really I think it is, but it’s also common business sense to realise that they maybe cannot do everything which a longer-standing supplier can in such a short space of time.
So what should you do? Well, buy a new database because it is the right system for you. And if it turns out that the best system for you is cloud-based then fantastic, you’ll get all the benefits of that. And the downsides. And if you end up hosting a Windows-based system on your own server – fantastic; you’ll get all the benefits of doing that. And the concerns and issues. And if it can’t integrate with FaceTwitEtc then how much does that matter? I mean really matter? Is your fundraising going to fall apart because you can’t do such integration? Or actually, more likely, is your fundraising going to fall apart because you can’t process income efficiently, you can’t segment your database in the way in which you really want to, you can’t support your major giving team, your events team, your DM and telemarketing teams. And you can’t analyse your data and use it to make the most informed decisions for your charity.
So do your system assessments based on your requirements and the benefits you will get. Of course technology will be part of that – the technology which is available now and that which will be in the future, which of course includes the web and social media. Of course, cost is important, very important, but it’s not just software cost, it is the Total Cost of Ownership, and that over (say) a 5 year period. And of course you should look at new options on the market – every now and then a new system will come along which really is fantastic and will, if not quite blow all the other systems out of the water, then they will certainly give them a damn good run for their money. But at the end of the day, you make procurement decisions based on the benefits the software will give you. It’s not one thing and it’s not that simple. And please, remember that your fundraising software has to still do all the fundamentals that you need it to do. Now.
Posted by Ivan Wainewright at 1:42 pm

Email ThisBlogThis!Share to TwitterShare to FacebookShare to Pinterest
Labels: Procurement

Great post Ivan. I've had experience recently of colleagues being impressed by similar pitches. I find that sales people of cloud based CRMs tend to go a bit ashen faced when you ask about gift aid reporting and tell you that customisation is charged at a grand a day.

I too though am looking forward to a day when we can use cloud based applications. I fear that a lot of UK orgs will not want to be the guinea pigs that pave the way with the provider to get a suitable product for everyone else.

Nice post. Would be great to know if you've looked at the solutions you're ranting about? If you haven't then would it be fair to say it's a pretty illogical stance?

I hope when you're giving advice to your customers you're a bit more thorough in your research!

Ian, this isn't about a specific solution - it's about the underlying business concept. That the benefits of any software solution has to be considered across every angle and not just technology and the latest SM tool. I just worry that some Nonprofits won't see that.

And in case it helps: I have attended seminars, events, webinars and had demos on SalesForce, CiviCRM and Microsoft CRM in the last few months, and from different vendors and for different applications - not just fundraising. In fact, one of my more recent procurement projects was won by a Dynamics reseller over a "trad" package on which I would wholey agree with you - it was unbelievably a dinasaur and hadn't changed in years.

Hi Ivan, as I said back on my blog, we're 100% aligned. We looked at the technology, saw it was a millions miles ahead of traditional software and we've spent the last year working on the business side. A team of people with a lot of experience managing fundraising databases at some of the biggest NFPs on the planet. And that's just our team, we've brought in other fundraising experts as well to help make it even better than we can.

The problem I have with your post is that it comes from a position of no knowledge about what you're talking. To say you've seen Salesforce is like saying you've seen Windows. It's just the underlying technology that other people (like us) build upon. We've been building something which takes an incredibly powerful platform and makes it suit the needs of a fundraising organisation.

We've been around in this sector for over a decade as a company and we've only done that by making sure we deliver on what we say.

Personally I've been in technology for over 20 years having been through the hype of the dot com days I know this time it's different - and I came into the latest 'cloud' hype with a healthy dose of scepticism having been burnt a decade earlier. The business models have matured, the technology is more than ready and now the end users can see daily how much easier technology is when it just works from the start.

It really, really isn't about the technology - it's about what it can do for people and organisations and the newer web-based platforms offer so much more. No hype, just reality.

Time will tell. I'm in no doubt and I have to say the feedback from NFPs and fundraising consultancies who know their stuff has been amazing. And we've only just started on this...

Hi Ivan, you got me thinking so I wanted to put down properly why I think this isn't hype:
http://appiboss.wordpress.com/2011/05/21/behind-the-hype-of-the-cloud/

Hi Ian – Your point about Salesforce/Windows is very interesting because, since writing my post, I have been thinking more about what I said and that is indeed the one thing I want to clarify:

The problem which I think we all have - that's me, you, other vendors and charities - is that with Salesforce, and other platforms such as MS CRM, because it is a "platform" and it is meant for building on, then some people, i.e. consultants, NFP staff et al, may see one solution based on it which is presented by one vendor and think it is poor, but then see another and realise it is very good. I’d analogise it more to MS Access than Windows – Access is often berated as being a weak database but actually it’s the applications which are built on it which are good or bad; and I have seen good Access databases and bad. In fact, With Salesforce, this issue may be more accentuated because it obiously has a base structure for CRM so it will be possible to get more resellers producing different versions.

So I do agree with you on that. I think we may all have this issue for a while and clearly you’re right that for a specific application I need to see it.

My only slight issue with your post is that I take a wee umbrage to say I have no knowledge about what I’m talking! I have seen Salesforce several times and so I know the underlying structure and approach – and I have seen applications built in it - and I have talked to Salesforce clients/other individuals who like it but who have also shown me concerns which for fundraising I know need to be addressed - so I hope I know something. And I do think that my experience of many different systems stands me in good stead when it comes to understanding pros and cons of different systems.

As I said in another post, I am genuinely looking forward to seeing what you and others do to make it a force to be reckoned with!